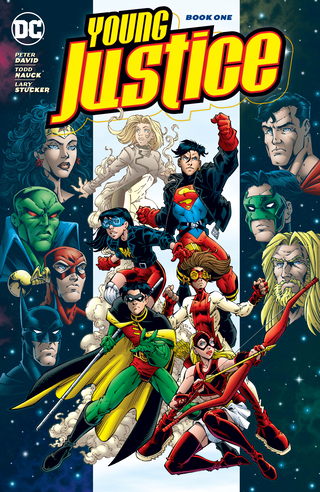 A League of Their Own
Advertisement:

In 1996, riding high on the Grant Morrison relaunch of the Justice League, DC Comics attempted to relaunch Teen Titans yet again. It failed miserably, in large part due to massive amounts of Executive Meddling. Most notably, the fact that no one wanted to let the 1996 Teen Titans writer Dan Jurgens use any of the major teen heroes running around DC at the time (particularly Robin III/Tim Drake, who actually WON a fan contest to select a new member of the team — only for the Batman editors to refuse to honor the contest results, resulting in Captain Marvel Jr. being forced upon Jurgens instead.) The lack of "Teen" in the "Titans" didn't help, either.

Cancelled in 1998, DC decided to launch a new replacement book; but since the Jurgens Titans series was pretty much universally reviled, it was decided to instead come up with a new name for the new teen book. Meanwhile, Robin's popularity was matched by two other teenage superheroes with ties to Justice Leaguers: Impulse and Superboy — and the trio worked as a Power Trio. Hence, "Young Justice" was born.

Launched out of a Fifth Week Event tie-in "Girlfrenzy: Young Justice — The Secret" and a Justice League mini-series "World Without Grown-Ups", the series was written by Peter David and ran for 55 issues before being cancelled. The cancellation (along with cancellation of Titans) was done mainly to launch a new Teen Titans comic to complement the recently debuted Teen Titans cartoon series, placing the remaining members of Young Justice under the wing of veterans from the classic Wolfman Titans team.

An animated series using the Young Justice title was announced by Cartoon Network during their presentation to the network upfronts on April 21st, 2010. Interestingly, the Teen Titans show was originally pitched as Young Justice.

The Young Justice team returned as the flagship title of Brian Michael Bendis' Wonder Comics imprint, with a relaunch in January 2019. The team stars the four most well-known members: Robin, Impulse, Superboy, and Wonder Girl, alongside Amethyst, Princess of Gemworld and newcomers Jinny Hex and Teen Lantern. Notably, this marks the team's return after 16 years since their dissolution. See the relevant Young Justice page for details.