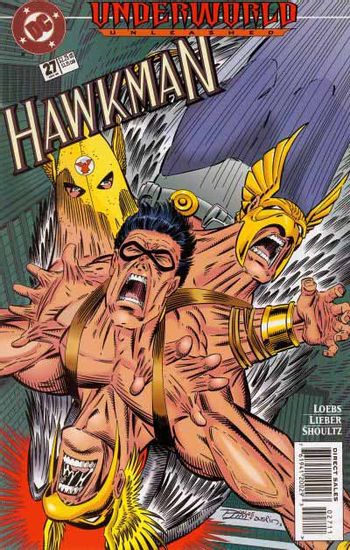 Behold, the Hawk-Snarl!
"Thanagar's champion, Hawkman can talk to birds. He also can't talk to birds. Sometimes, he can't even speak normally at all! Even if he could talk normally, or to birds, there are no birds on Thanagar, because it does not exist. Hawkman was sent here to study Earthly police methods, because Thanagar's own methods suck! That's OK though, because Thanagar still does not exist! Yet it is populated by peaceful barbarians! Who are stupid, and also warlike!"
— Kirk Kimball

, Dial B for Blog

Hawkman is the poster boy of Continuity Snarl for a reason. Mostly this is because his Golden Age and Silver Age pre-Crisis versions were particularly different in concept, to a degree approaching In Name Only, but post-Crisis writers have kept trying to somehow merge the two. His background is something of a Thanagarian snare beast. So grab your pills and try to follow us as we explain his complicated history.

Hawkman was first created by Gardner Fox during the Golden Age. He was Carter Hall, an archaeologist, who found an ancient dagger. He discovered that he was the reincarnation of the ancient Egyptian prince Khufu. He created his suit with the Nth metal, and fought alongside the reincarnation of Khufu's wife Chay-Ara. The character notably became one of the most prominent founding members of the Justice Society of America. His series was eventually cancelled, along with all of DC's superhero comics of the time (except for Superman, Batman and Wonder Woman).

Most DC characters were reimagined during the Silver Age, but with new powers, origins, suits and names, and often with a more science-fiction and less fantasy-genre concept. Now Hawkman and Hawkgirl were Katar and Shayera Hol, alien cops from the planet Thanagar who came to Earth in pursuit of a criminal named Byth Rok. They had wings made of Nth metal. The police gave them secret identities as Carter and Shiera Hall. No problems so far: the new Hawkman makes perfect sense, and the old one could be simply considered Early Installment Weirdness. The Pandora's box was opened by Flash, in the "Flash of Two Worlds" story. It established that all the old DC characters were still alive on Earth-Two, an Alternate Universe, including Hawkman. Which meant that there were two completely different and unrelated Hawkmen and Hawkgirls running around (along with two different Flashes, Green Lanterns, etc.; but let's just stick to Hawkman). However, as the characters lived on separate Earths it was still pretty easy to distinguish them from each other and keep track of their origins.

Then in 1985 DC merged all their various alternate universes into a single universe with the miniseries Crisis on Infinite Earths. This was an attempt to clean up their convoluted continuity, but in the case of Hawkman it just made things worse: now we had the two Hawkmen, the alien cop and the archaeologist, both existing on the same Earth. The aliens were briefly members of the Justice League International, while the Golden Age versions were temporarily trapped in Limbo along with the rest of the JSA in an attempt to subject them to Chuck Cunningham Syndrome.

But then things got screwed, with the 1989 miniseries Hawkworld. In it, Katar Hol is an alien on Thanagar and ends up partnered with Shayera Thal II. Okay, fine, it could just be a more detailed version of the JLI Katar's origin... but then the popularity of the miniseries led to a Hawkworld ongoing series, which took place in the present day, and had Katar and Shayera come to Earth in pursuit of the criminal Byth. This is what started it all. It meant that the original Hawkworld was not a retelling of the origin, but a completely new one: now we had two Katar Hol Hawkmen around.

Trying to fix that mess, it was established that the Hawkman that joined the JLI was actually the spy Fel Andar from Thanagar — an alternate version of whom had briefly appeared pre-Crisis, there named "Fell Andar" with two Ls — who took the false identity of Carter Hall Jr., the son of the reincarnating Hawkman who was currently in Limbo. Even worse, he brainwashed his girlfriend Sharon Parker to make her believe that she was Shayera, Hawkgirl, and killed her when she learned the truth. And to add to this mess, Hector Hall, the actual son of Carter Hall, was still alive post-Crisis. Around this time, Carter Hall and the rest of the Justice Society were brought back from Limbo as well.

Let's recount what we have so far: Carter Hall, the reincarnating Hawkman from the Golden Age; Shiera Hall, the reincarnating Hawkgirl from the Golden Age; Fel Andar, the spy Hawkman that joined the JLI and pretended to be Katar Hol; Sharon Parker, the Hawkwoman that joined the JLI who'd been brainwashed into believing that she was Shayera Hol; the real Katar Hol, the Hawkman from Hawkworld; and Shayera Thal, the Hawkwoman from Hawkworld. If you are already having a headache, we can't blame you. What can we do to fix this? Answer: a new crisis crossover!

The 1994 miniseries Zero Hour! made an effort to tidy everything up and simplify the status quo. It was revealed that Katar's father had landed on Earth at some point and met Carter Hall, and based Thanagar's wings on Carter's and named his son (Katar) after Carter; it was also revealed that Katar was half-human. All the disparate Hawkmen and Hawkwomen were fused into a single being, a "Hawkgod". The end result was that Carter, Katar and Shiera did not exist anymore, Fel Andar became a character of his own and Shayera went back to Thanagar. Unfortunately, this didn't end up settling everything as hoped. Although there was just one Hawkman now – the Hawkgod version – and the ongoing "Hawkman" comic kept going for another year and a half after "Zero Hour", the sheer weight of the character's convoluted backstory led DC editorial to decide that he was just too much of a mess by now to be usable and to declare the character entirely off-limits. For example, Grant Morrison was prohibited from including Hawkman in the early issues of his series "JLA", leading him to create the new winged character Zauriel as a substitute.

Some years later, James Robinson, Geoff Johns and David Goyer revived the Justice Society in the series JSA, but how can we have that team without the Hawks? So they established that Shiera's soul escaped from the Hawkgod and reincarnated in Kendra Saunders, the new Hawkgirl, who had no memory of her previous lives, which also allowed them to ignore the snarl. Geoff Johns continued from there, and brought Hawkman (Carter Hall) back. He merged both origin stories: a ship from Thanagar crashed in ancient Egypt, and Prince Khufu and his wife Chay-Ara got access to their tech and the Nth metal. They were killed by the priest Hath-Set and reincarnated several times. Also, since Carter Hall absorbed Katar Hol's memories while they were the Hawkgod, you can just consider Katar an unofficial reincarnation. If we skip the disaster between Crisis and Zero Hour, things mostly make sense.

Afterwards, there was a relatively minor example not related to the wider Hawksnarl: Carter and Kendra died in an explosion in Final Crisis. But Johns wanted to use them for Blackest Night, so they were brought back to life again; and even the arts and plot for Kendra's funeral had to be altered in Justice League of America at the last moment to fit this. They were killed by the Black Lanterns and became zombies. They were revived again, and Kendra turned completely into Shiera. They were turned into wind creatures in the climax of Brightest Day, and Shiera disappeared after that.

Then, all of the DC universe was rebooted with the New 52 and the snarl began anew. In this continuity, Hawkman is Carter Hall again, an archaeologist/linguist. He tried to retire for some vague reason (that was never revealed) at the start of his series, but when he tried to destroy his armor, the shards of Nth metal fused into his body and gave him permanent powers. Meanwhile, Kendra was rebooted onto the new alternate universe Earth-2 as a completely unrelated character who went by Hawkgirl but was otherwise unrelated to the main universe's Hawkman mythos.

Then Rob Liefeld retconned Carter's origin story in a #0 issue, revealing that "Carter Hall" was actually Katar Hol from Thanagar and had amnesia; Carter Hall was just a cover identity he adopted when he landed on Earth, despite the fact that "Carter" was shown to have knowledge of Earth's history while actually being a renowned archaeologist — supposedly because Katar was misidentified as Carter, however, Katar had himself demonstrated historical knowledge! Things happened, Shayera was introduced and killed, Katar joined two different Justice Leagues, and then finally died in the Death of Hawkman miniseries... his last words being "see you in the next life", possibly implying that the reincarnation thing was still canon?!

And then the real Carter Hall Hawkman, Khufu memories and all, was revealed to have existed in Dark Nights: Metal, alongside a Shiera Hawkgirl. Once again, Prince Khufu and Princess Chay-Ara found a crashed spaceship made of Nth Metal and operated as Hawkman and Hawkgirl throughout their numerous lives. One of those lives happened to reincarnate Khufu as Carter and Chay-Ara as Shiera. Both operated as Hawkman and Hawkgirl as usual and died at some point in the past. Both were reincarnated again, this time Shiera coming back as Kendra Saunders — this time recalling her previous lives — both once again operating as Hawkman and Hawkgirl. Carter later disappeared into the Dark Multiverse while Kendra took up the identity of Lady Blackhawk. This could explain how Katar was able to pass himself off as Carter — he just happened to use a name that actually had all the credentials of an archaeologist — but why Kendra would allow this and not get involved remains to be seen. Oy...

The 2018 Hawkman series fixed some of the post-New 52 mess by revealing that Hawkman didn't just reincarnate through time, but through space as well, meaning he was both Carter Hall and Katar Hol at one point or another, as well as others like Catar-ol of Krypton, and Katarthul of Ranna. His new origin is essentially a fusion of his New 52 and Earth-2 origins with the tangles brushed out. However, Carter Hall never actually died, so why he reincarnated as Katar Hol hasn't been explained, nor has Kendra's ignoring of Katar or his using of Carter's name. Not helping matters is how Catar-Ol of Krypton was alive during Krypton's destruction, however the timing of it (Superman must be a baby during it due to his origin, and Carter was alive before Clark's birth and never died) means that he co-existed with Carter Hall! This was made worse when Shayera Thal returned as well, meaning she also co-exists with Kendra, and would go on to hang out with Carter Hall a lot, and the two act romantic without ever once acknowledging that Kendra is still alive and around.

And there you have it (for now). A backstory so convoluted it took a full two episodes of Justice League Unlimited to even scratch the surface. Well... So long as you don't count Hro Talak.