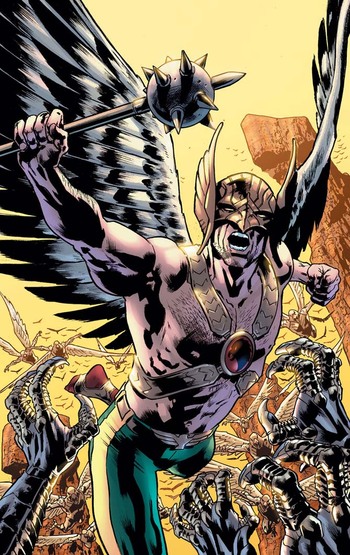 Once more unto the snarl.
"Outward exploration. Discovery within. I have to believe I'll find the answers I'm searching for. That no matter how deep the darkness, no matter how suffocating the spaces...I'll find my way to the light and open skies."
Advertisement:

Hawkman is a comic book from DC Comics, written by Robert Venditti and drawn by Bryan Hitch, beginning in June of 2018.

Launched in the aftermath of Dark Nights: Metal, the series sees Carter Hall exploring the truth behind his multiple lives. Carter discovers that he did not begin life as Prince Khufu but as Ktar Deathbringer, a servant of the Lord Beyond the Void. However, Ktar would defect after meeting a woman named Shhra, who served a higher power, and the two would be intertwined throughout several lifetimes. Now, the Deathbringers are coming for Carter... and Earth.

The series is generally standalone and does not interact with the rest of the DCU (in fact, in typical fashion, it contradicts some of it). However, it does have an arc that ties into the Year of the Villain pseudo-event.

The series ended after 29 issues.

Tropes applying to Hawkman (2018) include: