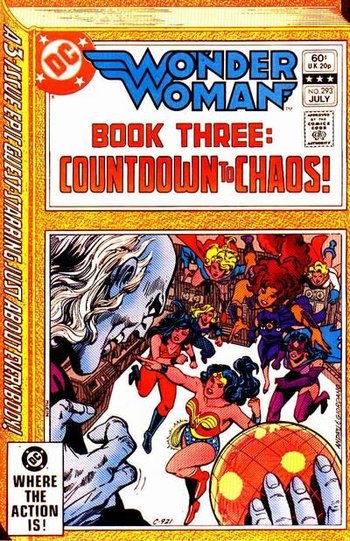 Judgment In Infinity is a Wonder Woman 1982 storyline published in Wonder Woman (Vol 1) issue #291-293. Paul Levitz, Roy Thomas and Gene Colan are credited with plot, script and art, respectively. It is noteworthy as the first team-up featuring most of DC's female heroes.

As investigating a commotion in Washington DC, Wonder Woman meets a weird, imposing figure in the center of all the chaos. Although she fails to restrain him, her Lasso of Truth gives her a glimpse of his mind: her enemy calls himself the Adjudicator and fancies himself as a judge of worlds who wipes out civilizations which are not up to his standards. Though, he is confused as to why humans have not wiped themselves out so far.

Before he vanishes, Wonder Woman learns he intends to test four Earths in the Multiverse. If any of them fails his test, though, he will destroy Earth-One, and due to its place as a cosmic keystone, its destruction will set off a chain reaction which will obliterate every Earth in the Multiverse.

Alarmed, Wonder Woman calls an urgent meeting of the Justice League of America. Her sibling-in-arms take her history seriously, but they are puzzled because they have never heard of the Adjudicator. In the wake of the League meeting, Zatanna approaches Diana and reveals her mystical perception allows her to know where the Adjudicator will strike. She also knows he plans to model his agents after an old human myth.

After hearing Zatanna out, Wonder Woman realizes she will have to call several of her fellow heroines to protect four different Earths from the Four Horsemen.