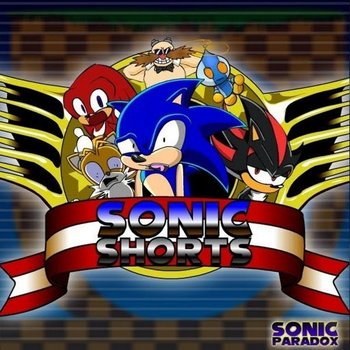 "You are aware that most of the Sonic Shorts are about me running into things and getting hurt, right?"
— Sonic to Knuckles after the latter decides to make his own shorts
Advertisement:

Sonic Shorts is a Newgrounds Flash collaboration by The Sonic Paradox Team set in the Sonic the Hedgehog universe. As expected, the shorts parody various aspects and scenarios of the games and TV shows, but many of them contain plenty of meta-humor involving the characters' reactions to their own in-universe works.

Currently, eight "volumes", two Musicals, three spin-offs, two parody volumes (known as Sonic Shits) and a sub-series (called Sonic Seconds) have been released. The eighth volume was shown in Summer of Sonic 2013, seemingly acting as a Grand Finale to the series. However, the team is currently working on a new Shorts collab that goes beyond the Sonic franchise and instead pulls from all of SEGA's history. Many members of the team have since contributed to the Abridged Series Sonic F, also released under the Sonic Paradox banner. After many years and complications and several other videos to tide fans over, they finally released the Sega Shorts

The Sonic Paradox Team has uploaded the entire series to YouTube

. Individual shorts can also be found on their respective creators' YouTube channels.

This collaboration contains examples of:

BACK TO MAIN MENU