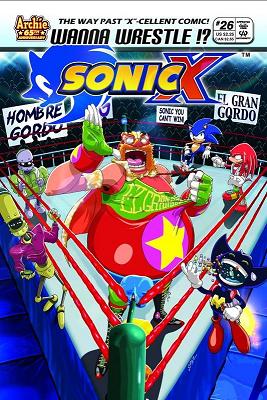 A comic series created by Archie Comics, Sonic X could be considered a Spin-Off of their long-running Sonic the Hedgehog comic book series, taking place in an alternate universe that is ostensibly the same one seen in the anime Sonic X (some time before the finale of the first series). The story, (as we're reminded at the beginning of every issue) is that Sonic and his friends have been transported to Earth by one of Dr. Eggman's machines, and now they do battle with the doctor here, while hanging around the house of the insanely wealthy Chris Thorndyke on their off time.

That's about the point where any sense of restraint gets thrown out the window.

The series lasted for forty issues (November, 2005-February, 2009) before the executives at Archie decided to pull the plug. It focused more on lighthearted slapstick and fun than ongoing storylines, though it did have a few, such as the evil organization S.O.N.I.C.X. and Eggman's stint as the beloved lucha libre El Gran Gordo. Unfortunately, as a result of the early cancellation, things were wrapped up hastily, and a planned conclusion of the El Gran Gordo storyline (and presumably others) never saw the light of day.

Still, short as it was, it was fun while it lasted.