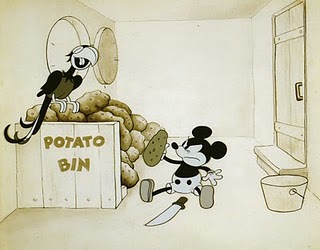 Cackadok and hart, thats smart!* It's actually "Hope you don't feel hurt, big boy!" Ha ha ha ha ha ha ha!
"Behold the potato! Bow to this fruit of the earth, and then peel it as if it were the last task of your miserable life!"
— Rolf, Ed, Edd n Eddy
Advertisement:

It has many names. Kitchen Patrol (aka KP). Spud Bashing. Whatever your detail calls it, it seems you Can't Get Away with Nuthin', and once you're caught it's a Smash Cut to sitting on the floor of a drab kitchen somewhere next to a sack of potatoes, peeling them one at a time.

The stock Punishment Detail in the military in fiction, presumably for its instant-recognizability factor as opposed to, say, digging holes in the ground (read: latrines).

No longer Truth in Television, at least in the U.S. military, due to heavy use of third-party contractors who employ civilians to do this kind of stuff. Well, that and there are machines that peel potatoes these days.