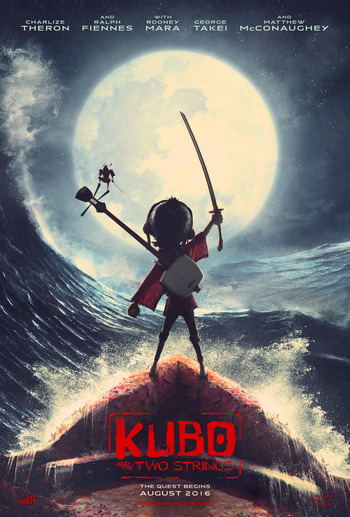 The Quest Begins
"If you must blink, do it now. Pay careful attention to everything you see no matter how unusual it may seem. But please be warned: if you fidget; if you look away; if you forget ANY part of what I tell you, even for an instant, then our hero will surely perish."

Kubo and the Two Strings is a Stop Motion animated movie produced by Laika and directed by Travis Knight.

Twelve-year-old Kubo lives with his catatonic mother on top of a mountain. By day, he is known as a storyteller to the village below, and by night, he must return to take care of his mother, never finishing the stories he tells.

One night, after encountering the mysterious Sisters, he is sent away to find the only thing that can protect him: his late father's armor.

Along the way, he meets Monkey, a familiar sent by his mother, and Beetle, a cursed samurai who claims to have known his father. Meanwhile Kubo must learn to develop and control his own magic, which he can utilize through playing his shamisen.

The movie premiered on August 19, 2016. The first trailer is here

. The second trailer is here.

The fourth trailer is here.

Has no relation to Tite Kubo, author of Bleach, or Mitsurō Kubo, writer of Yuri!!! on Ice.

Tropes found in Kubo and the Two Strings include: