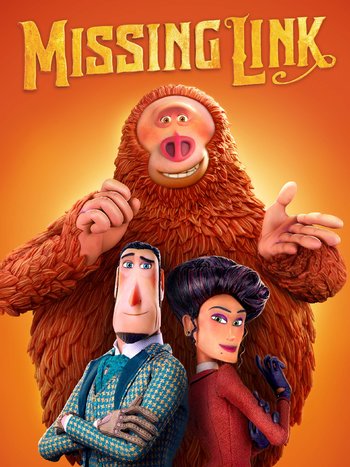 Join The Adventure. One Adventure Links Us All.
Advertisement:

Missing Link is a 2019 Stop Motion animated Adventure Comedy film by Laika. It's notable for being their first film to not have a Kid Hero since Corpse Bride (which wasn't fully a Laika movie anyway, though they were involved), and their first film to be devoid of any horror elements. In 2020, it became the first fully stop-motion film to win a Golden Globe Award.

The story follows Sir Lionel Frost (voiced by Hugh Jackman), an avid explorer who seeks to discover proof of the world's most famous legends. One day, he receives a mysterious letter telling him where he can find the Bigfoot, he then travels to the Pacific Northwest and encounters a Sasquatch (voiced by Zach Galifianakis) who reveals to Sir Lionel that he was the one who wrote the letter, that he is the last of his kind, and wishes to join the Yetis, his cousins, in the mythical land of Shangri-La. Together, the two set off on an incredible journey across the globe to unite Mr. Link with his brethren.