Anime / Mirai of the Future 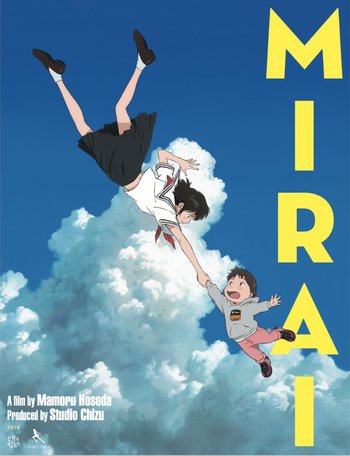 Mirai of the Future note (known in the United States as simply Mirai) is a 2018 anime film written and directed by Mamoru Hosoda (The Girl Who Leapt Through Time, Summer Wars).

Meet Kun (voiced by Moka Kamishiraishi). He's a 4-year old kid in Yokohama with all the parental attention he could ask for... or so it was, until his parents give him a surprise in the form of a baby sister named Mirai (Kaede Hondo). Feeling like all the attention he had is slipping away, Kun runs off into the family garden.

However, the garden has an odd quirk of its own, because the next thing he knows, Kun is meeting his mother as a little girl and his great-grandfather as a young man. But then, Kun comes across a girl (Haru Kuroki) who's not only much older and taller than he is, but seems to know him very well. Moreover, she says her name is Mirai.

Wait, doesn't Kun have a little sister with that name?

...This just got awkward.

Mirai also stars Gen Hoshino as the father, Kumiko Aso as the mother, Mitsuo Yoshihara as the mysterious man, Yoshiko Miyazaki as the grandmother and Koji Yakusho as the grandfather.

The film has already found North American distribution via GKIDS. Received a nomination at the 91st Academy Awards for Best Animated Feature.

Mirai of the Future provides examples of: