You may be looking for Red Planet, which released in the same year. 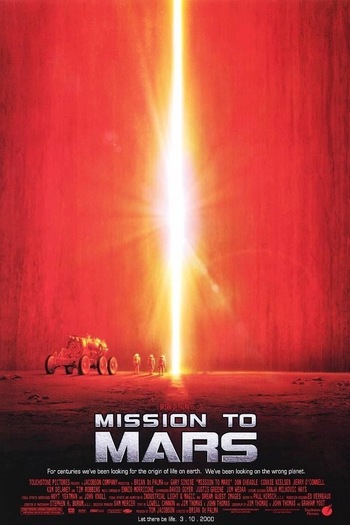 Mission to Mars is a 2000 science fiction film directed by Brian De Palma, depicting a mission to Mars that gets into trouble and the ensuing rescue mission. It was inspired by the Disney theme park attraction of the same name.

The astronauts—commander Woody (Tim Robbins), Jim (Gary Sinise), Terri (Connie Nielsen), and Phil (Jerry O'Connell)—are sent to find out what happened to the first expedition to Mars which sent a garbled Distress Call. They encounter a lot of challenges, including some in flight turbulence... in space! Where they have to do a perilous EVA repair. Mars itself is a treacherous planet, and the survivors of the previous expedition are not what they expected.