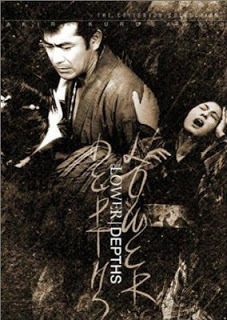 The Lower Depths (1957) (Donzoko, lit. Rock Bottom) is a film directed by Akira Kurosawa, based on the play by Maxim Gorky.

In 19th Century Japan, Rokubei (Ganjirō Nakamura) and his wife Osugi (Izusu Yamada), own a slum which they rent out to poor people. Those people include prostitutes, gamblers, and criminals, who are being bled dry by their landlord.

This sister, Okayo, brings a guest into the slum, a priest (Bokuzen Hidari), who tries to help people with their lives.

Kurosawa's adaptation of the Gorky play provides examples of...