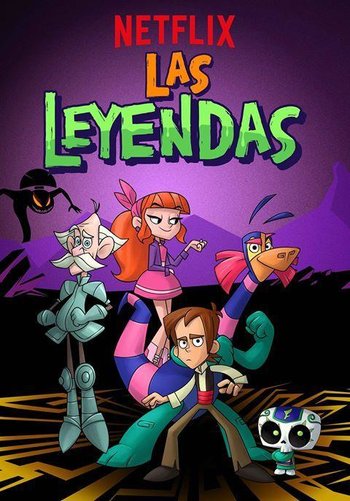 Las Leyendas is a series of horror/comedy animated films where the first film was produced by Cinemex and the sequels are produced by Anima Estudios.

The first film is set in 1807, in the city of Puebla de los Ángeles, New Spain. Leo San Juan, a 9 year old insecure kid, has always been scared by the stories that his older brother Nando tells him. Among these stories is "The Legend of the Nahuala"; according to which the old abandoned house located on Street of Nahuala number 7 is possessed by an evil spirit, Nahual, that took over the spirit of the house's cook. Now, the Nahuala is waiting for the soul of an innocent kid to revive and gain full power.

This legend turns into reality when the spirit of the Nahuala takes over Nando in the presence of Leo and makes him beat all his fears to rescue his brother.

Not everything is what it seems inside the bewitched house, and hidden inside are terrible secrets which are not only of great danger for Leo and Nando, but also for the peace and tranquility of the city of Puebla.

A reboot, Legend Quest, has since graced Netflix.

This series of movies provides examples of: