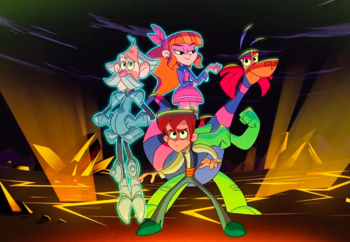 To Mexico and Beyond. Way, way, way Beyond.
Leo: That's Mt. Vesuvius? Wow! I've seen drawings-but-but-it's so majestic!
Ghost Legionairy: Yes, it killed us all, but I'm glad you like it.
Advertisement:

It's the early 1800s in Puebla, New Spain. For former Kid Hero turned teenager, Leo San Juan, it was supposed to be another adventure. Preferably his last, as all he desires after a turbulent childhood full of supernatural derring-do is a normal life, his newly-invented sport of Leg Ball to catch on, and the attentions of the charmingly enigmatic new girl in the neighborhood.

The souls of his fellow townsfolk had been stolen by a gaggle of ghoulish Aztec monkeys, creating a Zombie Apocalypse in service of bringing their master, Quetzalcoatl (who is in one of his fouler, world-destroying moods) into the mortal plane. With the help of his usual traveling companions: the ghosts Don Andrés (a friendly, but craven conquistador) and Teodora Vicenta de la Purísima Concepción de la Inmaculada Trinidad Villavicencio (a teenage girl wielding a strange, luminescent rectangular device of great knowledge and distraction) as well as the oftentimes peckish mythological rainbow beast Alebrije, Leo managed to thwart the scheme and avert a divine apocalypse. All in a day's work.

Then Quetzalcoatl pulled the entirety of Puebla and everyone in it down with him sans Leo and his team, who only just barely manage to escape the mad god's wrath.

To recover his home and his loved ones, Leo must seek out the Brotherhood, a global cabal of scholars and mystics who might have the answers he seeks. Unfortunately, he's short on clues and news of Quetzalcoatl's thwarted emergence has emboldened malevolent supernatural entities (the titular Legends) worldwide into committing further atrocities; some acting to free him, others of their own accord including the Jersey Devil, Medusa's ghost, and the conniving Baba Yaga.