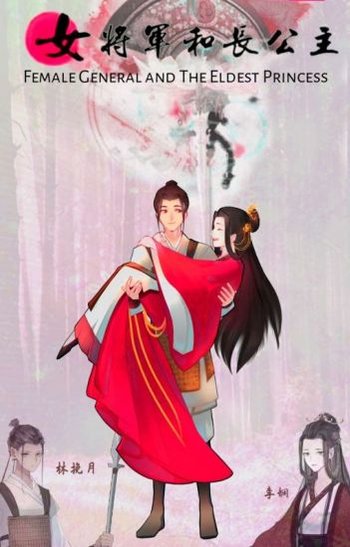 To live on in this turbulent world, to take revenge for her family, to seek justice for her entire village of a hundred and eighteen people who had their lives cut short, Lin Wanyue took the name of her younger twin brother Lin Feixing to enlist in the military, vowing to kill every single Hun under the sky. The Empress has passed into heaven, leaving the sixteen year old Eldest Princess, Xian and eight year old Crown Prince to depend on each other for survival. The other Seigniors who were older than the Crown Prince look upon the royal seat with ravenous eyes the position of these two siblings are in a precarious situation.

The story of a crossdressing General and a strategic all-knowing Eldest Princess enfolds; with betrayal, violence, thrilling romance, and acceptance.

Female General and Eldest Princess (often abbreviated as FGEP by fans) is a Girl's Love Historical Fiction drama set in Medieval China, albeit with heavy embellishments and an entirely made up cast of characters, written by a female author only known by their internet name; "Please Don’t Laugh". The fist chapter was originally published in 2017 on the online, Chinese web novel site, JJWXC. Proving to be extremely popular as new chapters were published it would regularly end up on the very top of the websites charts. It finished its run in 2018; just a year after the first chapter was posted. Eventually a fully author-approved English fan translation was released and can be found here

, alongside the original Chinese version

It has gone on to be adapted into an Radio Drama, as well as a Chinese Manhua(web-comic), both of which are still ongoing.

Female General and Eldest Princess contains examples of the following: