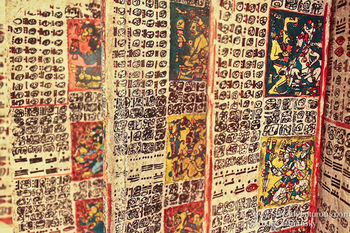 "And this was the life of the Quiché, because no longer can be seen [the book of the Popol Vuh]
which the kings had in older times, for it has disappeared.
In this manner, then, all the people of the Quiché, which is now called Santa Cruz, came to an end."
Advertisement:

The Popol Vuh (meaning "Book of the People"), written by an anonymous person, is the most complete piece of Mesoamerican narrative that survives to this day. It narrates the beliefs of the Quiché (K'iche'), one of the most successful of the tribes that descended from the Maya, living in what is today Guatemala. It is one of the major sources of Mayan Mythology.

Important to note about the Popol Vuh (and included in most versions as a preamble) is the story of the book itself. It was written after the Conquest, by an already converted Indian (who kept his ancient beliefs hidden), as a way to preserve his culture. It was later found and translated several times, sadly losing some of its wonder in the process.

The first part recounts the creation of the universe. Tepeu and Gucumatz (Quiché version of Quetzalcoatl/Kukulcán, Tepeu is more widely disputed but some equate him to the Aztec Tezcatlipoca) create the trinity god Huracán, who creates the earth and everything on it. In order to have someone to praise them, the first race of men is created out of wood, but the gods soon find out they can't think and destroy them with a flood. Then the narration gets distracted and follows the adventures of twin folk heroes Hunahpú and Ixbalanqué as they cause (on orders from Huracán) the downfall of the proud demon/god/primitive man (again, interpretations vary) Vucub-Caquix, who pretended to be the real sun, followed by an account of the murder of the two sons of Vucub-Caquix, Zipacná and Cabracán, also by the hands of the twins; the first one due to his (kinda justified) murder of a group of 400 young men that became Motz, aka the stars, and the second one for shaking mountains and general douchebaggery.

The second part tells the saga of Hun-Hunahpú, father of the heroic twins of the first part, and his brother Vucub-Hunahpú, as they are tricked and killed by the Thirteen Lords of Xibalbá, the Maya version of the underworld. The story then tells of how Ixquic, daughter of one of the Lords, becomes pregnant via the tree that had grown over Hun-Hunahpú's corpse and gives birth to Hunahpú and Ixbalanqué, who eventually defeat the Lords of Xibalbá in retaliation, after which they become the sun and the moon.

The third part of the story goes back to Tepeu and Gucumatz, who finally manage to create the first four men out of corn, and the first four women later. The story then tells the division of the first tribes and their lineages. At the end of the chapter the author explains the necessity of human sacrifice for the Quiché, in honor of their patron god of fire Tohil (who happens to have a lot of similarities to the Aztec god Huitzilopochtli, though some believe this is a coincidence).

The fourth part deals with the struggles of the Quiché with the other tribes, the lineage of their rulers and of the cult of Tohil. At the end, a certain noteworthy event known as the Spanish Conquest happens and the Quiché meet their doom.