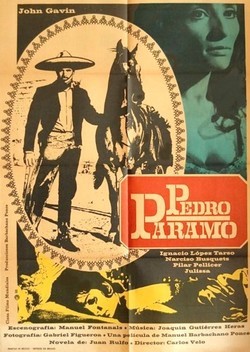 "Illusion? That is expensive. To me living costed much more than it was due" —as said by a dead woman.
Advertisement:

Pedro Páramo is a 1955 novel, a poetic and extremely sad novel by Juan Rulfo. It is ostensibly about the illegitimate son (Juan Preciado) of the title character returning to his father's hometown of Comala as a last request to his mother - to get back what his father owes him. It's considered by some one of the best mexican novels, ever, and is a classic of hispanic literature and even global literature, depending on who you ask.

In reality, the book documents the rise and fall of both Pedro and the Town, shifting constantly from person to person and back and forth in time. Comala is the Ghost Town (in more ways than one) trope taken to its extreme: most of its habitants are ghosts and/or memories unaware of their deaths, and it is notoriously difficult both for Preciado and for the reader to tell between the living and dead. Comala, though dangerous in its own quiet way, is not so much creepy as it is as a melancholic place lingering with the defeat of death and forgetting. This being Magical Realism it still manages to be eccentric and even somewhat funny.

It was adapted into a Mexican film in 1967, starring John Gavin (who, while Amercan, is of Mexican ancestry) in the title role.