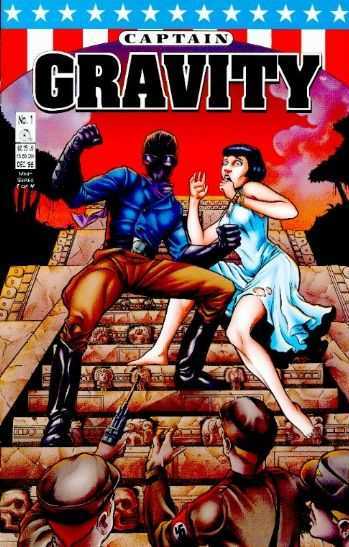 No one escapes the law of gravity!

The year, 1938. The place, the Maya ruins at Chichen Itza, Mexico. Joshua Jones is a member of a small film studio called Century Films, and personal assistant and friend to the CEO, C.F. Avery. Recently, they've been approached by a German named Jaeger, who wishes to take them to a ruin in Mexico to film a pulp-inspired Superhero movie called "Captain Gravity: The Curse of Ah Puch". By billing it as the first ever movie shot on-site at the ruins, it could surely pull Century Films out of the B-Movie ghetto they've found themselves in.

And they've managed to land a real star in the form of Chase DuBois, who's returning a favour for Century Films giving her her very first big break (even if they have to have Shane Radcliffe star as Captain Gravity). Jaeger has also brought along Professor Goethals as a consultant to make sure that everything is accurate to the legend, and that the natives don't attack.