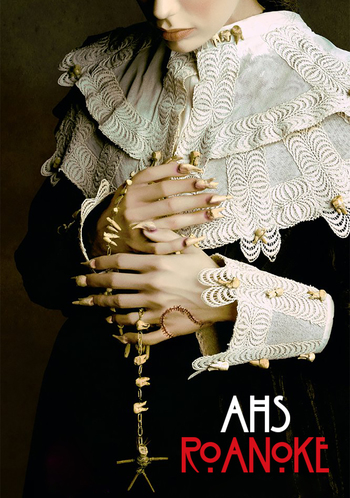 The sixth season, presented as a faux paranormal documentary series "My Roanoke Nightmare" about an interracial couple (Shelby and Matt Miller) who buy a home out in the woods in Dare, North Carolina. Unfortunately, everything that can go wrong starts to go wrong for the couple: the house turns out to be a former nursing home owned by a pair of murderous sisters who butchered their clients. Matt's drug addicted ex-cop sister Lee kidnaps her kid, who promptly goes missing on the property, while the land is the same land as the legendary lost colony of Roanoke. And the colonists, led by the maniacal matriarch the Butcher, don't take kindly to tresspassers, unless it is to use them for their annual ritual blood sacrifice to the Harvest Moon... Which is almost upon them.

Unlike previous seasons of AHS, very little information about Roanoke was revealed prior to airing. A total of twenty-six promotional videos were released in the weeks leading up, but according to Murphy, only one

of them was indicative of the real seasonal theme. The subtitle itself, Roanoke, wasn't confirmed by FX until the day after its premiere.

The season further breaks from tradition, by using the usual production troupe of actors from the series in shared roles per the documentary nature of the season: Lily Rabe and Sarah Paulson, Andre Holland and Cuba Gooding Jr, and Adina Porter and Angela Bassett play Shelby, Matt, and Lee Miller as the "real" version of them and their actor reenactor counterpart respectively.

Denis O'Hare also returns as a writer who used to live in the house (and whose video tape diaries recording the history of the house provide backstory), while Lady Gaga, Kathy Bates, and Wes Bentley return as the leadership of the Roanoke colonists.