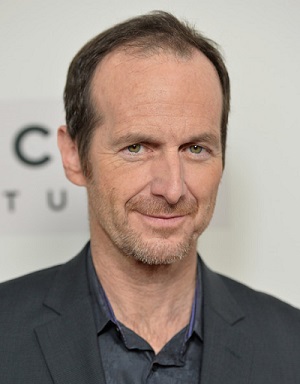 Denis Patrick Seamus O'Hare (born January 16, 1962 in Kansas City, Missouri) is an American actor noted for his award-winning performances in theatre, television and film. On the theatre scene he's perhaps best known for his turns in Take Me Out, Assassins and Sweet Charity, while he's gained recognition on television as Ensemble Dark Horse Russell Edgington in the HBO show True Blood. He's also a frequent collaborator with Ryan Murphy, having appeared in four incarnations of American Horror Story and Murphy's adaptation of The Normal Heart.
Advertisement:

He is also known for his supporting roles in the films Charlie Wilson's War, Milk, Changeling and Dallas Buyers Club.

O'Hare is openly gay, marrying Hugo Blackwood in 2011. They have an adopted son together named Declan.