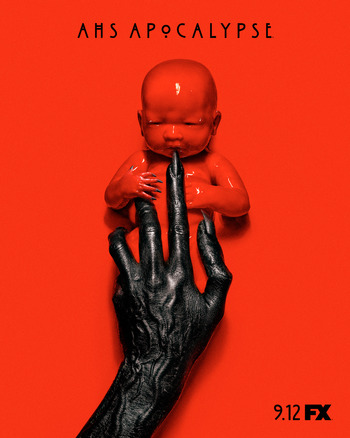 They're back with a vengeance.
Michael Langdon: What do you think?
Miriam Mead: Hail Satan.
Advertisement:

Apocalypse is the eighth season of the Ryan Murphy's horror anthology series American Horror Story. The first episode aired on FX on September 12, 2018.

The world has ended. The lucky few who haven't been ravaged by radiation, violent stragglers, or both are kept in survival bunkers operated by a mysterious organization called The Cooperative.

Outpost 3, led by Wilhelmina Venable (Sarah Paulson), is one such bunker — and it's running out of resources fast. When Cooperative representative Michael Langdon (Cody Fern) arrives to cull a select few for the so-called Sanctuary, things get even weirder from there...

Apocalypse is also the long-awaited crossover between inaugural season Murder House (2011) and fan-favorite Coven (2013), with at least a few characters and cast members —including Fern's Langdon, now an adult— from each returning to reprise their roles.

♫ Come, if you're curious to see
Pull the tricks out of my sleeve
All you find is yours to keep
Brave, are you brave enough to meet
The desires that you seek
Hold my hand, I'll set you free... ♫