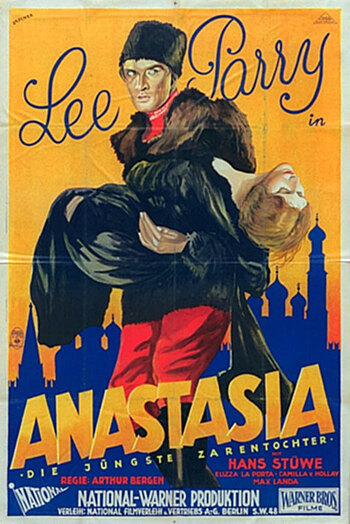 Translation: Anastasia, the False Czar's Daughter
"Have you heard
There's a rumor in St. Petersburg?
Have you heard
What they're saying on the street?
Although the Tsar did not survive
One daughter may be still alive
The Princess Anastasia!
But please do not repeat..."
— "A Rumor In St. Petersburg", Anastasia (1997)
Advertisement:

One of the Stock Unsolved Mysteries of the twentieth century, until it was solved in 2009 with a definite "no".

Following the events of Red October, the abdicated Tsar Nicholas II and his immediate family were exiled to the Siberian city of Yekaterinburg. On July 17, 1918, with the anti-communist White Army closing in on the city, the former Tsar, his wife Tsarina Alexandra, and their five children — Grand Duchesses Olga, Tatiana, Maria, and Anastasia and Tsarevich Alexei — were all executed by Bolshevik soldiers. Or were they? (Yes they were.) For many years, some people insisted that the Tsar's youngest daughter, then-seventeen-year-old Anastasia, survived and escaped. (She didn't.)

Why the focus on Anastasia and not another of the Tsar's five children?note In the Soviet Union, in fact, the daughter believed to have survived was generally either Tatiana or Maria; there were also some lesser-known rumors that Tsarevich Alexei might have also survived, but these never gained much traction due to the fact that Alexei had a severe form of hemophilia that made it exceptionally unlikely that he could have survived being wounded, on top of which Alexei was unable to walk at the time of the shooting and therefore would have had no way to even try to take cover. Well, it all began in 1920, two years after the execution of the Romanovs, when a mysterious Slavic-accented woman turned up in Berlin. Suicidal and apparently amnesiac, she was admitted to a local mental hospital. History generally refers to this woman by the adopted name of Anna Anderson. Within a couple years, she would claim to be the Grand Duchess Anastasia. Anderson gained much publicity through a lengthy legal battle in which she sought to establish her identity as Anastasia in order to claim a share of the remaining Romanov fortune. Public opinion sided overwhelmingly with Anderson due to the inherent romance of a Rags to Royalty story. The case was finally ended in 1970, with the inconclusive ruling that there was no proof either way, but nevertheless denying Anderson the Romanov riches. When Anderson died in 1984, still claiming that she was the lost Grand Duchess, there was still no way to be certain what the truth was. After all, DNA testing wasn't a thing at the time, so the argument for both sides ultimately rested on hearsay. And besides, the site of the Romanovs' murder was located deep behind the Iron Curtain, hidden from the world by the Soviet Union's secretive government, so who could say for sure what had happened there?

Then came the end of the Cold War, and the Romanov burial site was revealed to the world. At first, it seemed there was hope for the legend, since the bodies of Tsarevich Alexei and one of his sisters were missing from the grave. Meanwhile, however, science marched on with advent of DNA testing, which finally proved that Anna Anderson not only had absolutely no relation to the Imperial family, but also was, in fact, not even Russian. In all likelihood, Anderson was actually a woman named Franziska Schanzkowska, a missing Polish factory worker with a history of mental illness, perhaps suggesting that her impersonation was a Napoleon Delusion to some extent. In 2007, another grave was discovered in Yekaterinburg, this one containing the remains of Alexei and his remaining sister, so at long last, all the Romanov children were accounted for. The last Romanov bodies were confirmed through DNA testing in 2009, establishing once and for all that the entire Romanov family, including Grand Duchess Anastasia, was killed in Yekaterinburg by Bolshevik guns on July 17, 1918. Case closed.

During the 89 years it took to get there, however, the premise that Anastasia had survived became a perennial fixture of Western popular culture. This trope is technically an example of Dated History, but it shows every sign of continuing, at least in works which are either exploring her survival as a deliberate counterfactual or taking significant liberties with historical fact anyway.

Coincidentally, the name Anastasia means "resurrection". This will often be mentioned in works employing this trope. Also, the proper Russian pronunciation of her name is, "ah-nah-STAH-see-yah," but many works will use the modern Anglo pronunciation of, "an-ah-STAY-zhah."

Subtrope of Lost Orphaned Royalty, which covers the general case of the last remaining member of a royal line being hidden away in secret. Any examples not specifically connected to the 20th-century Romanovs should go there.