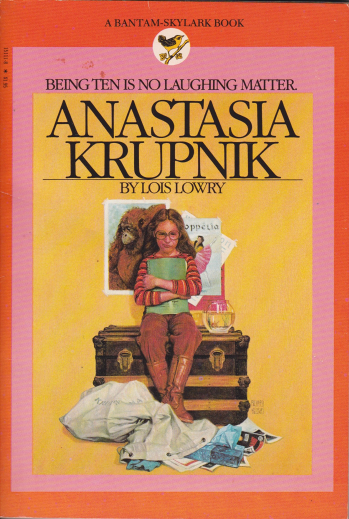 Anastasia Krupnik is the first book of a popular series of middle-grade novels by Lois Lowry, depicting the title character's life as a girl "just trying to grow up". Anastasia deals with everyday problems such as popularity and the wart on her thumb. The book is written in episodic fashion, each chapter self-contained with minimal narrative link to the others. At the end of each chapter is a list written by Anastasia, listing her likes and dislikes, showing the character's growth and development through the story. Other books, with the exception of two, also had a link with each of the other chapters, such as Anastasia's science project, her "Chosen Career" essay, etc.

The Anastasia Krupnik series was 29th on the American Library Association's "The 100 Most Frequently Challenged Books of 1990–2000" for reasons such as references to beer, Playboy magazine, and a casual reference to a character wanting to kill herself. The series was also criticized because one novel of the series featured Anastasia replying to a personal ad and lying about her age and her life to an older man; however, the two never have any romantic experiences and when they meet, the man has no idea that Anastasia is the woman to whom he had been writing.

Tropes in these books include: