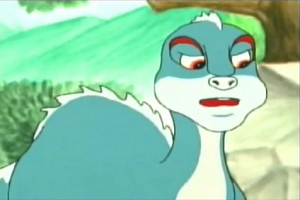 Welcome to The Great Uncanny Valley.
"Rubbish!"
—Many, many characters in these cartoons

(formerly Media Concept and Dingo Productions) was a German low budget animation studio. Its movies are knockoffs of well known movies, many of them from the Disney Animated Canon, and in terms of production quality they are... not exactly on the same level as the films they are mockbusting, which leads to often humorous but sometimes nightmarish results.

Unusually, when translated into English, its movies were sold as games, appearing on the PS1 and PS2 despite the only game portion being puzzle sections and a painting program. On the PS1 these were published by Midas Interactive, and on PS2 by Phoenix Games. EastWest handled English distribution of their films on DVD. These usually came bundled with bonus cartoons, mostly shorts that have since fallen under the public domain. The company went defunct around 2006, but its website is still in operation.

Some traits of Dingo Pictures cartoons:

The Flash Tub has parodied their style a number

Their works include (bluelinks lead to the movie(s) being copied):

Another "Hercules" cartoon (Legend of Herkules), not made by Dingo Pictures, was released by Phoenix Games, as were the works "Mighty Mulan", "Peter Pan", "Cinderella", "Pinocchio" and "Snow White and the Seven Clever Boys".

These animations provide examples of: