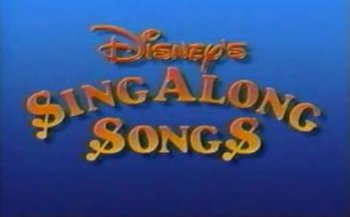 "You'll find out, before you're done,
music's fun for everyone!"
"Is everybody ready?"
"To sing along!"
"With Disney songs!"
"A Disney Sing-Along!"
—Professor Owl and his students, the first lines of the original theme song
Advertisement:

Disney's Sing-Along Songs is a Walt Disney Home Video series consisting of compilation clips from various Disney movies, shorts and TV shows. The series launched in 1986, and became one of Disney's most successful and long-running video series, the last volume appearing in 2006.

The series, as the name implies, centers around songs being played for the viewer and the viewer invited to sing along. The original set of videos usually featured one of three interchangeable hosts- Jiminy Cricket, the intrepid guide from Pinocchio, Ludwig von Drake, a rather ditzy inventor whose previous credit was hosting Walt Disney's Wonderful World in Color, and Adventures in Music Duology star Professor Owl, whose reasoning for showing the songs was usually teaching his class of young owls about the songs. As the series progressed, they would be dropped and often Mickey and Minnie were used in their stead.

Advertisement:
open/close all folders
Tapes in the original series
Zip-a-Dee-Doo-Dah (1986)

The first release (though labeled Volume 2 starting in 1990), Professor Owl hosts a collection of Disney songs.

The second release in the series (though labelled Volume 1 starting in 1990), Professor Owl hosts another set of Disney tunes.

Jiminy Cricket (in his Sing Along Songs hosting debut) looks at a set of songs about the animal kingdom and its inhabitants.

Professor Ludwig von Drake takes you on a sing-along world tour with songs either about flying or taking place in various nations.

Professor Owl (with help from Ludwig von Drake) hosts a lesson about the importance and fun of music.

Ludwig von Drake takes you on a cruise through a nautical-themed sing-along show, inspired by The Little Mermaid. The first Sing Along Songs release to coincide with a then-new theatrical released Disney film, and the first to feature "Disney Scenes", featuring newly recorded songs set to archive animation, presumably because there weren't enough nautical or underwater musical cartoons in their library.

Take a musical trip through "The Happiest Place on Earth" with Mickey Mouse and his friends. Basically a proto-release of the later Mickey's Fun Songs tapes, this was released to coincide with Disneyland's 35th anniversary, and features a large amount of re-used footage from 1983's A Day at Disneyland souvenir tourism video. Inspired the 1993 Europe-only sequel Let's Go to Disneyland Paris, which reuses some footage and songs from Disneyland Fun, and is available on the US DVD release via French language settings.

I Love to Laugh (1990)note Renamed "Supercalifragilisticexpialidocious" in 1994 reprint.

Ludwig von Drake (in his first turn as a Sing Along Songs tape host) introduces a show of songs that are sure to get you laughing out loud.

Jiminy Cricket hosts a look at where music comes from and how it can help us feel things, inspired by Beauty & The Beast.

Jiminy Cricket hosts a show about finding our place in the circle of life, inspired by The Lion King. The first Sing Along Songs video to feature a reused song ("Ev'rybody Wants to Be a Cat").

The first Sing Along Songs video with no host, but themed after the newly released The Hunchback of Notre Dame.

In this live adventure, Bren and her dalmatian friends put together a doggone fun party. The only Sing Along Songs video with no on-screen song lyrics (closed captioning aside), though DVD reissues add on-screen lyrics. Inspired by the live action 101 Dalmatians feature film, but features no footage or music from that movie, and has its own standalone story.

Inspired by Mulan, this is the final video to feature Professor Owl, and only at the beginning at the program.

Mickey and Minnie are throwing a Halloween party at Disneyland's Haunted Mansion, and you're invited! Similar in structure and presentation to the Mickey's Fun Songs releases, but only issued under the Sing Along Songs branding. Hosted by the Magic Mirror from Snow White & The Seven Dwarfs, this also features a number of "Disney Scenes"-styled musical numbers using archive Disney animation, unlike other live action Sing Along Songs videos.

Flik from A Bug's Life takes us on a musical safari through the new Disney's Animal Kingdom theme park to meet the animals that live there. Similar in structure and presentation to the Mickey's Fun Songs releases, but only issued under the Sing Along Songs branding. Notable in the series for including some educational content about animals at the Animal Kingdom, and for including some preview footage from A Bug's Life.

The only Collection of All Time Favorites release in the United States to feature an exclusive song ("One Last Hope", whose only prior release was on the Europe-only video From Hercules).

Mickey's Fun Songs
Inspired by the success of Disneyland Fun, Disney made three live-action sing-along videos, called Mickey's Fun Songs, featuring Mickey Mouse and friends taking a group of kids on fun adventures, singing mostly popular children's songs with the occasional Disney tune or pop hit. They were repackaged with Disney Sing-Along Songs packaging and graphics in 1996. The later Happy Haunting & Flik's Musical Adventure videos are similar in content and structure, but their first-run releases were with the Sing Along Songs branding.

The gang travels to the Ringling Bros. and Barnum & Bailey Circus, where Mickey is the guest ringmaster for tonight's show.

Mickey and friends stake out camp at the Fort Wilderness campground and have fun roughing it with adventure, games and a talent show.

Mickey and friends spend a day hosting a beach party at the Polynesian Resort, with surfing, a luau and a trip to Blizzard Beach.

Revival
In the 2000s, Disney started releasing new Sing-Along Songs volumes on VHS and DVD (with yet another new cover art template, and an all-new intro) as well as updating previous titles.

An update of 1988's Very Merry Christmas Songs, with new holiday tunes mixed in with the original songs.

An update of 1994's Circle of Life, with additional songs added to the mix.

Inspired by Brother Bear, and hosted by Rutt & Tuke from that movie.

Inspired by Home on the Range, and hosted by Maggie from that movie.

The last three volumes were sold as part of the Disney Princess franchise, and consisted mostly of songs from the princesses' movies.

Sheryl Bernstein informs viewers about the Disney Princesses (including some not officially part of the line), while playing some of their songs.

Sheryl Bernstein invites viewers to meet with the Disney Princesses at a tea party, and serves treats themed after their respective stories.

The last Disney Princess-themed Sing-Along DVD has the princesses send letters to the viewer.

This video series contains examples of:

Yeah, that actually sounds like a LOT of things!

Yeah, that actually sounds like a LOT of things!