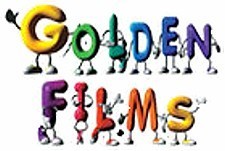 Golden Films, also known as American Film Investment Corporation, was an American animation company founded in 1989 by Diane Eskenazi. Its objective was to create non-violent, quality films. Most of their output, however, can best be described as Mockbuster versions of popular animated films but have a very different development. The most famous of their products are the Enchanted Tales, which most are Animated Adaptations of classical fairy tales. It also has adapted adult novels like The Hunchback of Notre Dame by Victor Hugo (which also just so happened to have a Disney adaptation around the same time) and The Three Musketeers by Alexandre Dumas père and a pair of stories from The Bible.

Many of their works were distributed by and/or co-produced with GoodTimes Entertainment.

Since 2004 the company no longer produces new content and it is currently relying on licensing the existing one to various distributors and TV stations.

The company provides examples of (in construction):