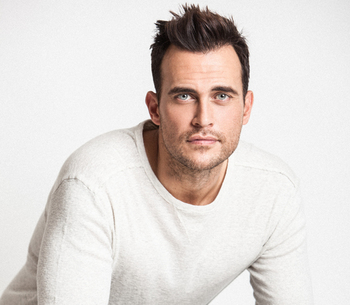 Cheyenne David Jackson (born July 12, 1975 in Spokane, Washington) is an American actor and singer-songwriter. He is Native American on his father's side, and openly gay.

Jackson is best known for his career in musical theatre, having starred in productions like Thoroughly Modern Millie, All Shook Up, Xanadu, and Finian's Rainbow.

He's also appeared in film and television, mostly notably a recurring role as Danny Baker on 30 Rock, Steve in the Munsters reboot pilot Mockingbird Lane, and Dustin Goolsby on Glee. Some of his notable film credits include the 9/11 film United 93 and HBO's Liberace biopic Behind the Candelabra.

Since 2015, he's been a part of the repertory cast of FX's horror anthology series American Horror Story, portraying different characters in four seasons to date: Hotel, Roanoke, Cult, and Apocalypse.