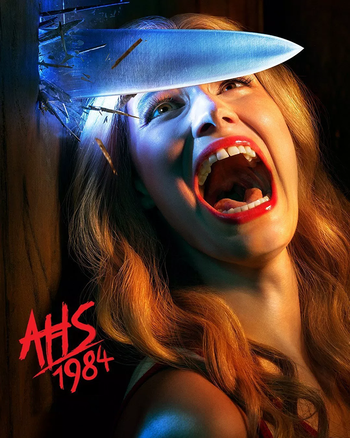 1984 is the ninth season of Ryan Murphy's horror anthology American Horror Story, airing on FX in 2019.

Set at the fictional Camp Redwood in 1984, this season takes a stab at the slasher genre, picking up cues from hits of the genre like Friday the 13th, Halloween, and Sleepaway Camp with a group of camp counselors being terrorized by a masked killer.

1984 marks a significant change in personnel for the American Horror Story franchise, as it's the first to not feature series mainstays Evan Peters and Sarah Paulson. Nonetheless, returning cast members from past seasons include Emma Roberts, Billie Lourd, Cody Fern, Leslie Grossman, and John Carroll Lynch, while past Murphy collaborators Matthew Morrison (Glee) and Angelica Ross (Pose) make their AHS debuts in this season. DeRon Howard (Dear White People), Zach Villa (Bordertown), and Olympian skier Gus Kenworthy (in his acting debut) round out the main cast.