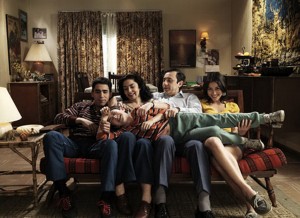 Los 80 ("The 80s") is a Chilean series about the life of the Herrera, a Chilean middle class family living in Chile during the 1980s. The family consists of the father Juan, the mother Ana, their young adult children Claudia and Martín, their pubescent boy Felix and, from the season 2 finale, their baby girl Ana.

The series focuses on how they are affected by the context of the decade, specially the right-wing dictatorship of Augusto Pinochet, who was in power between 1973 and 1990. They experience events and processes such as the deregulation of the economy, leading to the big 1982 crisis, the human rights violations perpetrated by the regime, the confrontation between the government and the clandestine opposition groups, the increase of working women, etc.