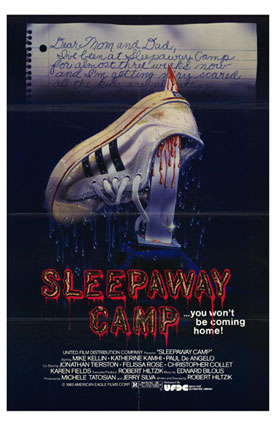 The Hotel California of summer camps...
"Dear Mom and Dad, I've been at Sleepaway Camp for almost three weeks... and I'm getting very scared."
— Opening line of the trailer
Advertisement:

Sleepaway Camp is a film directed by Robert Hiltzik, and it was released in 1983 during the heyday of Slasher Movies.

The plot follows two cousins, Angela and Ricky, who are attending a summer camp. Shortly after their arrival, people start to die. Especially those who pick on Angela...

The film became notorious for its Twist Ending and amassed a cult following over the years, mostly for its odd yet endearing mix of '80s slasher movie thrills and wistful summer nostalgia.

Oh my God! Someone remembered this movie and wrote a TV Tropes article about it!
Feedback

Just where did the killer stick that curling iron? Only the shadow knows...

Just where did the killer stick that curling iron? Only the shadow knows...