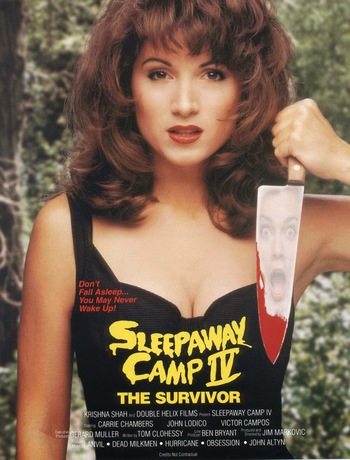 Even the poster is recycled material from the previous film.
Advertisement:

Sleepaway Camp IV: The Survivor is a Slasher Movie that started its production in 1992... and didn't get a full release until twenty years later.

Originally, Jim Markovic was the director but the company producing the film, Double Helix, went bankrupt and the project was scrapped. The existing footage was put together for a short half-hour film that was released as a bonus on the Sleepaway Camp Survival Kit DVD box set in 2002. In 2012, the webmaster of Official Sleepaway Camp Site

combined the footage with material from the previous films, which was then released on DVD.

The film follows Allison, who is haunted by the events of the first film and goes to the original camping grounds to find answers to her lost memories.