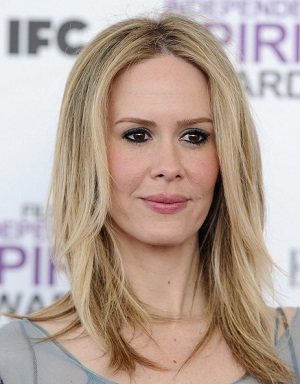 "I think it's very important for people to not judge the people you're playing. You have to find a way to love them because their story is theirs. I just don't think there would be any use in that."
Advertisement:

Sarah Catharine Paulson (born December 17, 1974 in Tampa, Florida) is an American film, stage, and television actress. She's perhaps best known for her roles in film and television, and for being a collaborator of Ryan Murphy. An intelligent and versatile actress, she was initially cast in comedic roles with films such as What Women Want and Down with Love, although on television she took on more dramatic flair with the short-lived and much-missed American Gothic.

Paulson has had many leading roles in television and independent film, having starred in Aaron Sorkin's Studio 60 on the Sunset Strip. The series was ill-fated, but Paulson was still nominated for a Golden Globe Award. She continued to work steadily and gain acclaim in a number of independent films and television productions, receiving further nominations from the Golden Globes and the Emmys.

In 2011, Paulson began starring in the FX anthology series American Horror Story. For her performance in the second season, she won the Critics' Choice Television Award for Best Supporting Actress in a Movie/Miniseries and was nominated for a Primetime Emmy Award in 2013. Also in 2013, Paulson starred as Mary Epps in the Oscar-winning historical drama 12 Years a Slave. She was nominated for a Primetime Emmy Award for Outstanding Lead Actress in a Miniseries or a Movie for the third season of American Horror Story in 2014.