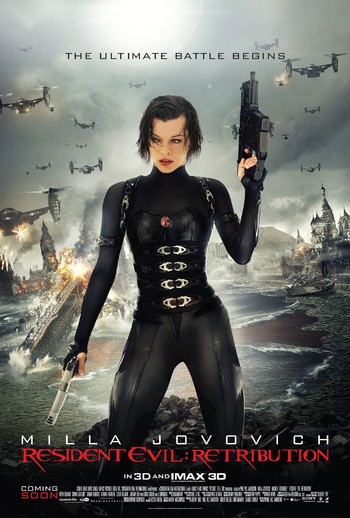 Resident Evil: Retribution is the fifth installment of the live-action Resident Evil film series. It marks the third film of the franchise directed by Paul W.S. Anderson and the second one filmed in 3D.

After the events of Afterlife, Alice awakens in the heart of the Umbrella Corporation's underwater operations facility in Russia. Once she escapes her cell, Alice runs into Ada Wong, who has infiltrated the facility with the help of Wesker, who survived the attempt on his life at Arcadia. The newfound allies discover that Umbrella has used Alice's DNA to both perfect and "stop" the virus. When they venture further into the facility, they discover that Umbrella has been using clones of both Alice and several of her dead friends as test subjects for the company's demonstration of its biological weapons. With a rescue party on the way and Umbrella's soldiers (led by a mind-controlled Jill Valentine) closing in, Alice must find a way to escape the facility so she can take down Umbrella once and for all.