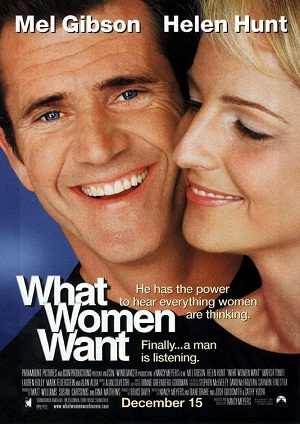 "If Men are from Mars and Women are from Venus, and you speak Venutian, the world can be yours."
Advertisement:

What Women Want is a 2000 Romantic Comedy starring Mel Gibson as Nick Marshall, an advertising executive who holds a really strong "Alpha Male" outlook on life, thanks to having a Vegas showgirl for a mother. He's skilled at marketing products to men, as well as romancing numerous women. Word at his agency is his boss Dan Wanamaker (Alan Alda) is looking for a new creative director, and Nick is convinced it'll be him, but it turns out he's hired Darcy McGuire (Helen Hunt), so as to broaden their appeal to women.

Further complicating matters is his divorced wife Gigi (Lauren Holly) has asked him to take care of their teenaged daughter Alex (Ashley Johnson) while she goes on honeymoon with her new husband. And Alex has a much-older boyfriend, who she's embarrassed to be with in her father's presence.

One day, as part of a marketing assignment, Nick is trying out several women's products when he slips and falls into the bathtub with a hairdryer. When he awakens, he finds himself able to hear the thoughts of every woman around him. He's horrified, but after a meeting with his former marriage counselor (Bette Midler), he starts to see his telepathy as a gift, and he peruses the thoughts of women, including Darcy, to not only get ahead in marketing feminine products, but also in becoming closer with his female coworkers as well as his daughter.

In 2011, a remake was made in China under the title 我知女人心 ("I know women's hearts"), starring Andy Lau and Gong Li. Back in the U.S., a Gender Flip remake, What Men Want, was released in 2019 with Taraji P. Henson in the lead role.