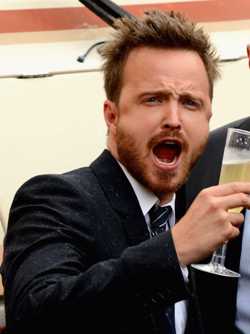 I'm now on TV Tropes, BITCH!
"I don't even draw on my life experiences when I'm acting. I just try and make it feel like I'm living through that person's skin."
Advertisement:

Aaron Paul Sturtevant (born August 27, 1979 in Emmett, Idaho) is an American actor. He is best known for his critically acclaimed role as Jesse Pinkman in the hit AMC series Breaking Bad. For this, he won three Primetime Emmy Awards for Outstanding Supporting Actor in a Drama Series, making him one of five actors to win the award more than once (and the only person to have won three times, at least since the category split to reward purely dramatic performances). He has also won two Saturn Awards for Best Supporting Actor on Television.

He was also the main focus in the video to "Thoughtless" by Korn.

Thanks for viewing my page, BITCH!