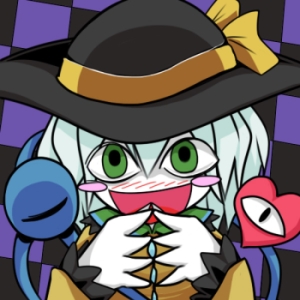 Her hat is her friend, and it helps her relax. <3

"THIS ALL HAPPENED BECAUSE OF A FISHING ROD."
—A YouTube Commenter

Koishi Komeiji's Heart-Throbbing Adventure (or "Komeiji Koishi No Dokidoki Daibouken" in Japanese) is a 2009 Web Original series of videos made by Nico Nico Douga user Sentakusen, telling a harrowing, violent and badly-drawn story about Koishi Komeiji attempting to acquire a fishing rod. Set in Gensokyo (albeit with the 'crazy' throttle stuck on full), it's notable for portraying a number of Touhou Project characters as substantially more mentally unhinged than they are in canon. As far as Touhou Project fan-fiction goes, it's at the very extreme end of Darker and Edgier as well as Bloodier and Gorier reinterpretations of Gensokyo. It is well-known in Japanese Touhou fandom for its Crapsaccharine World depiction of Gensokyou where everyone is Driven to Madness.

You can begin watching the series (if you dare...) in English here