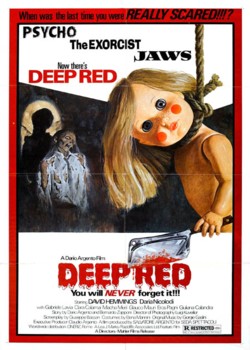 Deep Red (or Profondo Rosso) is a Giallo movie from Dario Argento and, alongside Suspiria (1977), considered his greatest work.

The story follows the main character, the music teacher Marcus Daly (Marc) who witnesses the brutal murder of a psychic medium, Helga Ulmann and, despite failing to rescue her, catches a glimpse of the killer. With the help of a reporter, Gianna; his best friend Carlo; and Dr. Giordani, an associate of Helga, he tries to uncover this mysterious killer and stop him before he kills again.

The film was very popular not only in Italy, but also in Britain and America (whose version, however, is cut and shorter) and even in Japan, where it's known as "Suspiria 2".