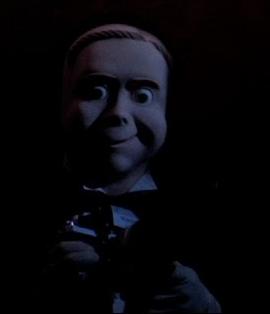 Ha! Caught you red-handed!
When the flies start to crawl, so will your flesh...
Advertisement:

Four Flies on Grey Velvet is a giallo film by Dario Argento from the year 1971, and last one in his "animal trilogy".

One day, professional drummer Roberto Tobias notices a strange man clad in black, who is following him everywhere. One night he goes after the man, and as he tries to question the man, the confrontation goes very wrong as the guy ends up being stabbed by his own knife and a mysterious masked person takes a picture of Roberto holding it. Soon after, Roberto starts receiving messages from that person which indicate that his life is going to become living hell, and he will be murdered at one point.

Four Flies has the examples of: