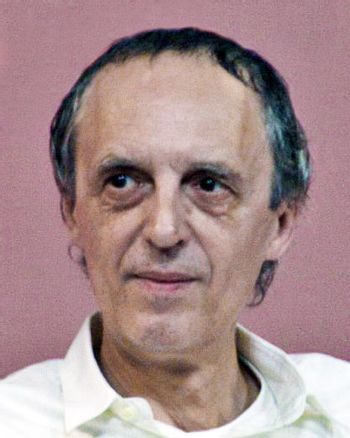 "Horror is like a serpent; always shedding its skin, always changing. And it will always come back. It can't be hidden away like the guilty secrets we try to keep in our subconscious."
Advertisement:

Dario Argento (born 7 September 1940) is an Italian horror director, producer, and screenwriter best known for his unique visual style and seminal work in the giallo sub genre. Though never particularly coherent or well-written, his films remain quite frightening and very cool to look at when he's at the top of his game. Widely considered to be at his peak during The '70s and The '80s, with Deep Red (aka Profondo Rosso) and Suspiria usually cited as his best work, and Trauma as the last really watchable film he made (though The Stendhal Syndrome is slowly becoming appreciated).

He also wrote or co-wrote a number of scripts, most notably Once Upon a Time in the West (alongside Sergio Leone and Bernardo Bertolucci).

His daughter Asia Argento has appeared in many of his films.

He also directed two episodes for the TV series Masters of Horror: "Jenifer" in season one, and "Pelts" in season two.

Tropes commonly associated with this director include: