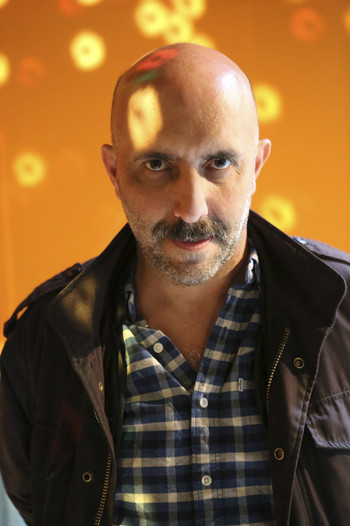 Gaspar Noénote pronounced "gas-PAR no-WAY" (born December 27, 1963 in Buenos Aires) is an Argentine-French director based in France who is considered one of the biggest names attached to both the euroshlock and New French Extremity film movements, which gives you some insight into what type of films he specializes in making.

An auteur through and through, his works often use the same techniques, including intense subject matter, thematic focus on nihilism and/or existentialism, realistic characters, and experimental cinematography. All of these elements combine to make cinematic experiences that aim to confront and disturb as much as dazzle and stun, and possess nigh-innate abilities to generate firmly polarized reactions and strong controversy.

This is a reputation Noé has seemingly embraced whole-heartedly as part of his public persona; the French DVD for Irréversible proudly declares the number of walkouts at its premiere, one of the posters

◊ for Climax is directly from the perspective of him as a nefarious Trolling Creator, and he once expressed disappointment in an interview

that the film didn't cause more walkouts.

Aside from his features, Noé has a healthily-sized backlog of short films under his belt, as well as music videos for the likes of Animal Collective, Placebo, and Nick Cave among others. He has also written, produced, and at least co-edited almost all of his features.

He has gone on record stating that Stanley Kubrick is his chief directorial influence — namely through 2001: A Space Odyssey, which single-handedly inspired him to become a director after watching it at 7.

Tropes that apply to Gaspar Noé include: