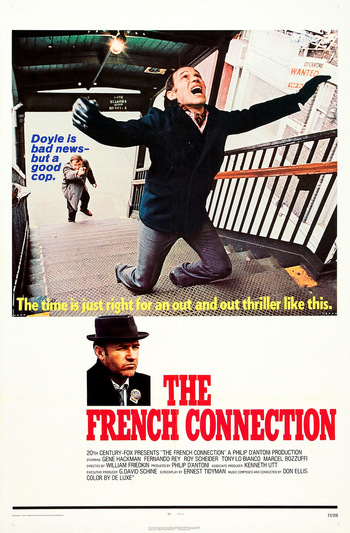 "All right, Popeye's here! Get your hands on your heads, get off the bar, and get on the wall!"
— Popeye Doyle
Advertisement:

A classic piece of seventies Hollywood cinema, based on the true story of the two cops who would stop the drug trafficking between France and the US, it was a huge success, both financially and critically. The film won five Academy Awards including Best Picture, Best Director for Friedkin, and Best Actor for Hackman. Thus it would come close to winning the Big Five, but lacked a female main character. It also won for Best Adapted Screenplay, and Best Film Editing and the car-chase alone is worth it.

The film's success actually led to an odd little pseudo-Shared Universe of films, mainly by virtue of being based on the same real-life case. There was one true sequel, the entirely fictional French Connection II (1975), with Doyle heading to Marseille in the hopes that his first-hand recognition of Charnier will help put pressure on the manufacturing end of the line. Popeye Doyle, a TV pilot movie was made in 1986, with Ed O'Neill as Doyle. The Seven-Ups is a Spiritual Successor starring Roy Scheider as an Expy of Cloudy Russo. Finally, in 2014 Cédric Jiminez made La Frenchnote Called The Connection in Anglophone countries., based on the same case, but covering the events on the Marseille end.