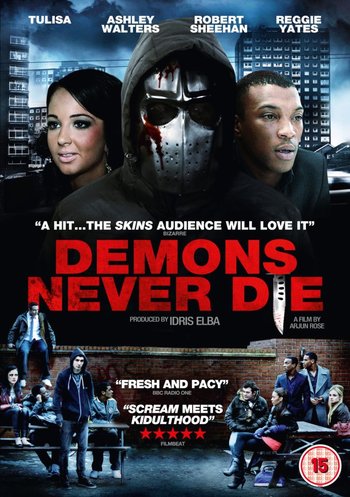 Fear has a new face. But whose face is it?
Advertisement:

Demons Never Die is a British slasher movie released in 2011, and stars Robert Sheehan, Jennie Jacques, Jacob Anderson, Shanika Warren-Markland, Jason Maza, Emma Rigby, Ashley Walters, Reggie Yates and Tulisa Contostavlos. The film follows a group of teenagers who make a Suicide Pact, and record video diaries of their final days. However, an unknown killer is hunting them down one by one, which leads some to question their will to live.

This film received mostly negative views, while some acknowledged the potential impact this movie made, such as the concept of young people debating on whether or not they actually want to die. However, the majority of reviews make note of its poor horror useage.

Not to be confused with the video game Demons Never Lie.