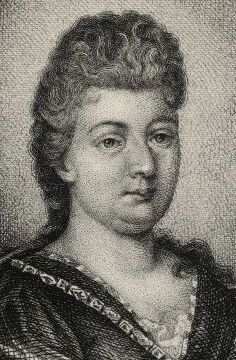 Madame d'Aulnoy's personal life is mysterious, but we do know that she wrote 24 literary fairy tales in her lifetime, which mix and match folk motifs from oral tradition with her own sensibilities. She was a key pioneer in the genre as we know it today — in fact, she was the one to give it the name "Fairy Tale" (or "Contes des Fees" in her native French).

Madame d'Aulnoy's works aren't as well known today as some of her contemporaries, but her influence is profound. Countless tropes inextricably linked with the modern images of fairy tales: The Power of Love, Beauty Equals Goodness, Fairy Godmothers and Fairy Devilmothers, even Prince Charming himself.

Her tales can be read in this link

D'Aulnoy's Fairy Tales with pages of their own on this site include: