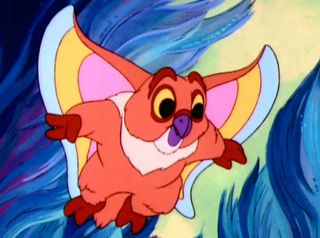 We hear it's a good way to get around.
Advertisement:

A trope mainly seen in fantasy: a character or creature is gifted with huge ears, possibly as large as their body.

Those ears don't just mundanely grant keen hearing: they can somehow flap, and are strong enough to actually give the power of Flight.

Don't expect the actual physics or biology behind this to be anything but handwaved.

Sometimes, the ears may even look more like real wings, with or without feathers, attached to the head rather than actual ears.

A Sub-Trope of Unusual Ears.

When the ears are instead spinning like a rotor, it falls into Heli-Critter. Compare Hair Wings, Mercury's Wings, and Helicopter Hair.