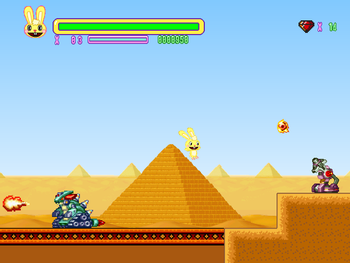 The series involves the main cast of HTF as they have to rescue Giggles (now Allay as of 2) from Bowser (the main villain of the Super Mario Bros. series), and the game is a crossover with many famous video game franchises like Mario (the most of it), Mega Man, etc. and the gameplay is a style of... you guessed it, Konami's NES games. The game is made in Multimedia Fusion 2/Clickteam Fusion 2.5 and the series was begun back in 2009, and plenty of sequels and spin-offs were made (in total of 11 as of 2017), many of them still being made or on hiatus. The list of the series' games are here:

...and many, many more planned.

The downloads for these games were firstly uploaded on MegaUpload officially from Radel999, but when it was shut down, many old HTFA games were lost in ashes, until somebody has recovered the games. Recently, the author himself has compiled all of the existing HTFA games along with his other game projects in a MediaFire folder

along with his Dunami Co. Ltd. channel

(most of 6- and Legends- related videos go here and it was never been re-used since now), however, he appears more often in DeviantART

, which he carries on a bunch of HTF fanart in decent HTF style. He even tried to make Bowser appear in HTF style too, but judging from his journals, HTFA is not the only series he made.

. Keep in mind that the site isn't managed by Radel999 himself.