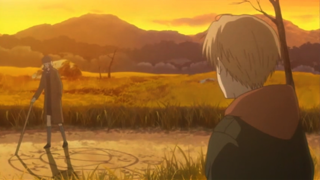 As Natsume researches strange circles which start appearing on the ground after a quiet girl named Taki starts attending his school he is approached by the youkai Chobihige who complains that the circles allow humans with no supernatural power to see youkai and he has been screamed at while walking along minding his own business so he wants Natsume to stop Taki from drawing the circles. When Natsume speaks with her he learns that Taki is searching for a youkai that cursed her since it gave her a time limit in which to find it again or it will eat her and the last thirteen people whose names she's said.

Tropes associated with the episode: