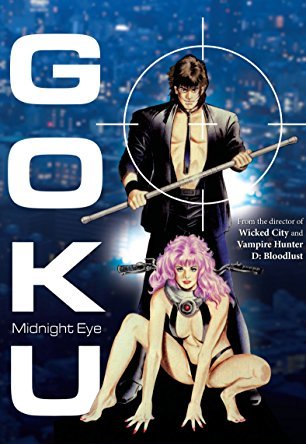 He has an eye on you.
Advertisement:

Goku Midnight Eye is a Cyberpunk manga series by Buichi Terasawa. It ran from 1987 to 1989 and received a pair of OVA by Madhouse under the direction of Yoshiaki Kawajiri. It takes some superficial inspiration from Journey to the West.

In the faraway year 2014, private eye and former cop Goku Furinji has a bad night. He is investigating a number of suicides of police officers when he encounters the person responsible for those suicides, a mysterious woman who promptly ensnares him in her hypnotic trap, and the only way to survive is to stab his own eye out. Fortunately for him, he wakes up fitted with the God's Eye, a cybernetic implant that allows him to access nearly every computer on Earth, and the Sun Wu Kong rod, a multipurpose weapon that can extend to quite a length. Now turned into the most powerful man in the world, Goku resumes the investigation only to find out it falls deeper into the net of underground rulers.

A live action adaptation was announced in the Cannes Film Festival in 2006 and is still waiting.