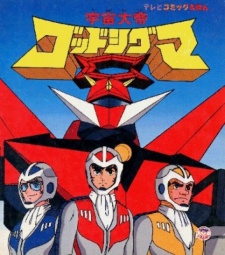 The powers of sea, sky and land combine to form God Sigma!
Advertisement:

Space Emperor God Sigma is an anime series aired from 1980 to 1981. There were 50 episodes. It is also referred to as "God Sigma; Empire of Space" and "Space Combination God Sigma;".

The year is 2050 and an energy crisis is Earth's main concern. A brilliant scientist in Trinity City develops the Trinity energy, a new source of energy powerful enough to supply the entire world. The alien empire of the Elda learn of this energy and plot to seize it by force. They attack Earth's space colony on Jupiter's moon of Io and occupy it. Meanwhile, the Trinity energy has been applied to three giant robots that combine to form God Σ, a mighty robot led by its main pilot, martial artist Toushiya Dan. With its mighty sword, it now stands between the peace of Earth and the power of the Elda forces.

However, later in the series it's revealed that the Elda forces came from the future, where Earth attacked Elda's home planet. Using an advanced time-machine the Eldans try to seize the secret of Trinity energy to save their home planet.