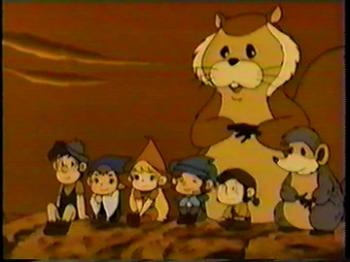 The Littl' Bits, known in Japan as Mori no Youkina Kobito-tachi: Belfy to Lillibit (Cheerful Dwarves of the Forest: Belfy and Lillibit) was a children's anime created by Tatsunoko Production and aired on TV Tokyo (then known as Tokyo 12 Channel)note Reruns in Japan post-1981 displayed the TV Tokyo logo, rather than the Tokyo 12 Channel logo, in the opening credits in 1980note As Tokyo 12 was an independent station without its own network at the time, the show was seen on Fuji TV, TBS, TV Asahi or Nippon TV affiliates in other cities, brought to North America and shown on Nick Jr. in the U.S. and YTV in Canada in the early 1990s after having already aired in most of Europe and Latin America. It focused on a race of tiny people living in a place known as Foothill Forest. While the show usually had lessons to teach, it did so in a subtle, non-Anvilicious manner.

Not to be confused with The Littles (though both deal in Lilliputians). Also noteworthy for being an early voice role for future seiyuu superstar Mayumi Tanaka, as the male lead.