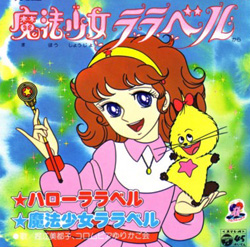 Magical Girl Lalabel is an early Magical Girl series, airing from 1980 to 1981. It was also the last Magical Girl series made by Toei Animation until the 1988 remake of Himitsu no Akko-chan, as other studios (most notably Studio Pierrot) picked up the slack during the eighties.

Lalabel is a Magical Girl living happily in the magic world, until the day she catches the thief Biscus stealing her magic tools. Startled by her sudden appearance, Biscus swings his magic wand around and accidentally transports the two of them into the human world. Lalabel is taken in by an elderly couple, the Tachibanas, and she attends school with their granddaughter, Teko, learning about human beings and their world in the process, while continuing to chase after Biscus and foil his further attempts to swindle people.